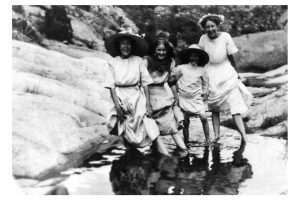 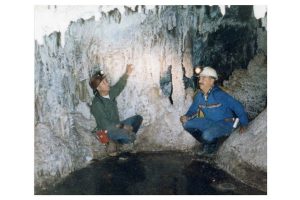 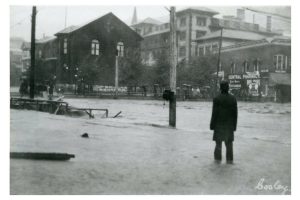 Washes carry runoff from the Huachuca, Chiricahua, and Mule Mountains

Drainage basins throughout the San Pedro and Sulphur Springs valleys

Bisbee is tucked into the Mule Mountain range in the southeastern corner of Arizona, twelve miles from the U.S. border with Mexico. The San Pedro River, an important source of water in the rugged region, flows west of the town. There are no Native American communities or reservations near Bisbee, but its founding is connected to Native American activity. Apache groups would raid the settlement and escape into the Mule Mountains. In 1877 a U.S. Army patrol went into the mountains to search for the raiders, but instead they found signs of lead, copper, and silver deposits. The discovery sparked a “mineral rush” that brought prospectors flocking to the area. New arrivals, hoping to strike it rich, settled into numerous mining camps.

Bisbee was the largest of these camps. Clean water was in short supply in the hilly mining camp as population and mining activity increased. With few other options but to trudge through the steep terrain, workers used burros to haul water in canvas bags from sources several miles away. The town incorporated  in 1902 and immediately started work on much-needed civic improvements and infrastructure. In 1929 it was prosperous enough to become the Cochise County seat, assuming this important designation from nearby Tombstone.

Bisbee was a one-industry town for almost 100 years. The Mule Mountains proved to be one of the most productive mineral sites in the world, yielding millions of ounces of gold and silver and billions of pounds of copper. Mining company influence had almost complete control over residents and local government. This led to one of the most troubling incidents in Arizona history: the Bisbee Deportation. Many workers went on strike in 1917 for better working conditions and wages. The Phelps Dodge mining company conducted an unprecedented strikebreaking maneuver. The company claimed that the strikers were Socialist-influenced Industrial Workers of the World members, motivating the county Sheriff to form a posse. Up to 2,000 deputies and vigilantes rounded up an estimated 2,000 striking workers, supporters, and bystanders at gunpoint and marched them to Warren ballpark. Around 1,200 detainees were herded into cattle cars and transported to New Mexico, unloaded into the desert, and told never to return to Bisbee.

By the 1970s ore reserves were almost depleted, and the faltering mines closed in 1975. Most of the mining town's residents made plans to move elsewhere. So many homes went up for sale at once that the real estate market collapsed. This sparked a transformation in Bisbee. Inexpensive housing attracted artists and self-described “hippies." These new residents helped create the arts and tourism-driven economy of today. They also transformed the once socialist-wary company town into a liberal political community. Bisbee made national news in 2013 by legalizing same-sex civil unions (in defiance of state law) and banning plastic bags in stores. Bisbee's remaining connection to its mining past, the Copper Queen Mine, has been put into service for the community’s new focus. Tours of the mine are one of the most popular attractions in the area.

CCRN is a collaboration by the cities of Sierra Vista and Bisbee, Cochise County, the Hereford NRCD and the Nature Conservancy. It works to preserve the health of the San Pedro River and the watershed that depends on it.

The Master Gardener program provides researched-based gardening information to Cochise County residents.  With this knowledge they can grow food, learn about native plants, and become better stewards of their high desert environment.

When Freeport-McMoRan acquired Phelps Dodge Corporation in 2007, the Copper Queen Mine came under the direction of Freeport Minerals Inc., Discontinued Operations.  Since then, the corporation has worked toward environmental restoration of lands affected by Bisbee’s 100 years of mining history. Learn more about remediation and community grants: http://www.freeportinmycommunity.com/communities/arizona

FSPR is a non-profit volunteer group dedicated to restoring and protecting the San Pedro River. The Friends raise awareness with school programs, interactive hikes, and historic and archaeological explanations of important sites related to the river.

Water Wise teaches water awareness and conservation with community programs and events for water users of all ages. Program participants can save money, save water and help the environment.

Friends of the San Pedro River: May 24th on the River