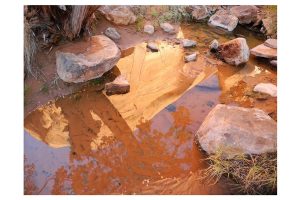 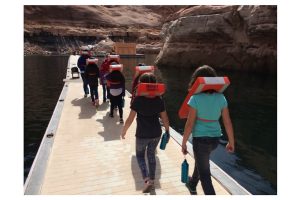 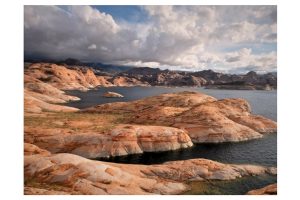 High Above the River

Page is situated on the course of the Colorado River but is perched far above the river itself, on the rim of Glen Canyon. It is located at 4,300 feet above sea level in a region known as the Colorado Plateau, a high oval of land that covers much of northern Arizona, as well as most of eastern Utah, northwestern New Mexico, and the far west of Colorado. The area around the city is nicknamed “canyon country” for its stunning, one-of-a-kind landscape.

Page has existed for a few decades, but the area has hosted human inhabitants for far longer. The Colorado Plateau is the traditional homeland of the Navajo people. The Navajo Nation extends on its northwestern boundary almost to the city of Page, and follows the southern shore of Lake Powell and the San Juan River eastward. The Colorado Plateau is also the ancestral homeland of the Pueblo peoples. The Hopi Reservation is the only community of Pueblo descendants that remains in the larger vicinity of Page.

Before construction of the Glen Canyon Dam and the steel arch bridge just downstream of it, the area where Page grew was isolated from other parts of Arizona. Commuting from other towns to work on the dam and the infrastructure needed to build it was next to impossible. A housing camp was established in 1957 on what was then Navajo land; it was dubbed Government Camp. The land it occupied was soon exchanged for a larger parcel in Utah, and the building of a small settlement began in earnest. Incorporated in 1975, Page is located in Coconino County.

One Dam, Many Meanings

Page’s economy relies mostly on Lake Powell, the Navajo Generating Station, and tourism. The generating station, the dam, and related government entities provide a reliable economic foundation that counters the fluctuating, seasonal contributions of tourist activity. In addition to being the gateway to Lake Powell, Page promotes itself as the epicenter of canyon country, a home base for tourists who wish to explore the wider region. The city is also the ignition point for environmental controversy Construction of the dam and the resulting inundation of Glen Canyon are credited with the birth of multiple environmental protection movements in the United States. Edward Abbey writes movingly of his trip down the Colorado River through Glen Canyon, just a couple of years before the dam was completed, in Desert Solitaire.

At 710 feet high, Glen Canyon Dam straddles the Colorado River and holds back the waters of Lake Powell. The Carl B. Hayden Visitor Center overlooks the dam, lake and river, as well as the bridge that spans the canyon.

This museum maintains an archive of artifacts and documents and hosts exhibits on the history and cultures of the Colorado Plateau. It also hosts the Glen Canyon Lecture Series and the annual Powell Symposium. The museum cultivates close relationships with area artists, is a display stop on weekly Friday art walks, and highlights a new artist each month.